There has been a nationwide boom in natural gas drilling, particularly in shale formations.  Many states have shale gas wells, in formations with names like Marcellus, Utica, and Barnett.  These have become gushers of cash for states and towns.  A common sight when travelling any back road anymore is to see shale gas wells peppered throughout the countryside.  And it is just as common to see signs staked in home owner’s front yards either extolling the benefits of or expressing environmental concern about “fracking,” the process used to extract natural gas from these shale formations.   In the year 2000, there were 342,000 natural gas wells. By the year 2010, 510,000 were in place, a significant increase in drilling activity.

Wherever this natural gas drilling happens, life changes.  Farmers that once had old farm debts are now wealthy landowners.  Small towns that were close to extinction are now thrilled with the infusion of cash and jobs.  States are welcoming the industrial activity and money as well as scrambling to address environmental and regulatory issues.  And industrial suppliers everywhere are trying to figure out how they can participate in this present day, natural gas gold rush.

For many of the traditional, compressed air equipment suppliers that find themselves in the center of the action, Van Air Systems has become not just a source for natural gas dehydration equipment, but an education center.  Many of the daily phone calls our technical applications department receives are from compressor salesmen wanting to learn more about natural gas dehydration applications.  We explain the difference between a standard D series deliquescent air dryer and our PLD pipeline natural gas dryer.   One of the most surprising differences is that unlike D Series dryers, we don’t internally coat PLD dryers.  This is because natural gas very rarely contains oxygen.  So the oxidation (rusting) of dryer internals is not a design factor.

We talk about which deliquescent desiccant will perform best given a specific gas temperature and operating pressure.  And we help with translating between compressed air and natural gas terminology.  For example, compressed air people express flow in terms of standard cubic feet per minute (SCFM).  Natural gas people talk about thousands or millions of standard cubic feet per day (MSCFD or MMSCFD).  Compressed air people express moisture content in terms of dew point.  In the gas industry it’s more common to discuss pounds of moisture per MMSCF.    The questions seem endless sometimes.  But as many teachers told us the first day of class, “There are no stupid questions.”

Product applications in the natural gas market are seemingly endless as well.  When Van Air Systems first entered the natural gas market in the early 1970’s, the focus was on gas dehydration at the wellhead using a deliquescent type dryer with desiccants formulated specifically for this application.  These were mostly on small volume, low temperature shallow natural gas wells.  Today many of the wells being developed especially in the eastern United States are high volume, high pressure, and high temperature.   These conditions don’t suit deliquescent drying well.  But where we’ve excelled is applying our deliquescent products for fuel gas conditioning, and instrument gas dehydration.  For example, many drill rigs now run not on diesel but on natural gas.  In many cases this gas is being drawn from a wet source.  That’s where we can help.

Several years ago we introduced heatless pressure swing dryers for natural gas service, our HLSXG series.  We are seeing a range of exciting new applications for these units. 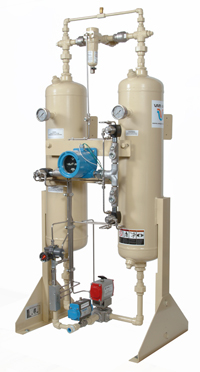 It’s an exciting time to be a player in the natural gas business, however small.  If you have a specific question or just want to learn more about our gas dehydration products, call or email me anytime.